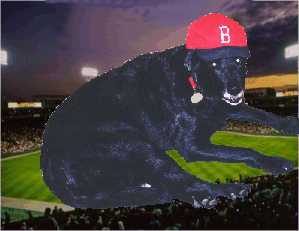 I will not eat the cats' food, before or after they eat it.
I will not burn rubber through the open car window and into the fast food restaurant, no matter how good it smells.
The computer's mouse is, unlike a real mouse, inedible.
I will stop trying to find the few remaining pieces of carpet in the house when I am about to throw up.
I will not throw up in the car.
I will scootch my bottom along the grass to rid myself of hangers-on.
I will not steal used sanitary napkins from the bathroom garbage.
I will not roll on dead seagulls, fish, crabs, etc.
I will not eat other animals' poop.
I will not lick my human's face after eating animal poop.
I will not roll my head around in other animals' poop.
"Kitty box crunchies" are not food.
I will not eat any more socks and then re-deposit them in the backyard after processing.
The diaper pail is not a cookie jar.
I will not eat the disposable diapers, especially the dirty ones.
I will not wake Mommy up by sticking my cold, wet nose up her bottom end.
I will not chew my human's toothbrush and not tell them.
I will not chew crayons or pens, 'specially not the red ones, or my people will think I am hemorrhaging.
When in the car, I will not insist on having the window rolled down when it's raining outside.
I will not drop soggy tennis balls in the underwear of someone who is sitting on the toilet.
We do not have a doorbell. I will not bark each time I hear one on TV.
I will not steal my Mom's underwear and dance all over the back yard with it.
The sofa is not a face towel. Neither are Mom and Dad's laps.
My head does not belong in the refrigerator.
I will not bite the officer's hand when he reaches in for Mom's driver's license and car registration.
I will not play tug-o'-war with Dad's underwear when he's on the toilet.
I do not need to suddenly stand straight up when I'm lying under the coffee table.
I will not roll my toys behind the fridge.
The garbage collector is NOT stealing our stuff.
I must shake the rainwater out of my fur BEFORE entering the house.